There is a whole different story to tell about 12 blokes, 4 days and 1 villa in Valencia…that’s for another day. This is the race report…

We had been warned that traffic is bad on the morning of the race so we had three taxis booked for 6.30am. Slowly everyone, lurched out of bed and down the creaking spiral staircase to consume their breakfast of choice like high viz zombies: toast, porridge, peanut butter and bananas, all washed down with carb drinks and coffee.

Last minute checks were done, drop bags organised and feet shuffled to the still dark street. Despite temperatures rising to nearly 25C during the day, nights by the Med were cold and we were happy to jump into the waiting taxis.

“Si” we replied in our perfect Brits abroad lack of linguistic skill. 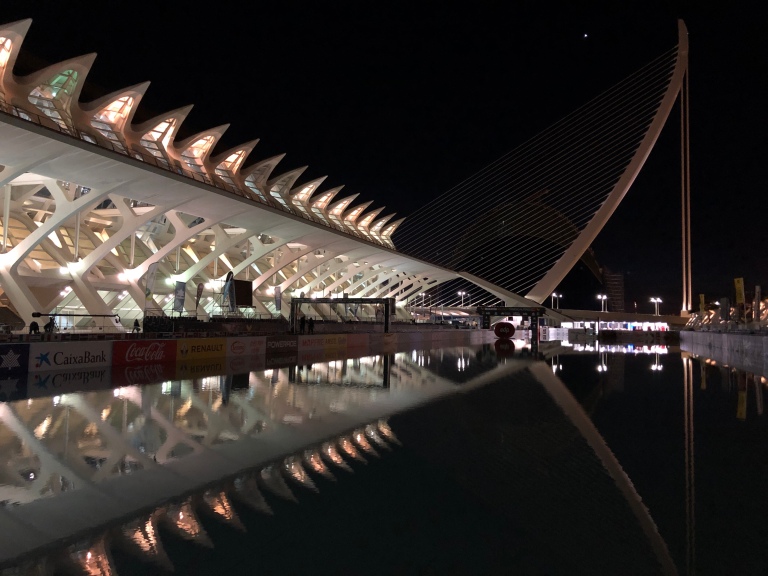 The roads were clear and we flew towards the bag drop. There was a pretty large crowd already formed near the Ciudad de las Artes y las Ciencias but instead of shorts and trainers, they were in short skirts and high heels. We’d arrived just as the locals were leaving the clubs to go home.

We got out of our taxi, said “gracias” to the driver and watched as a girl, smoking a cigarette of course, tottered into the cab.

This was about the point we all began to question the life choices we had made – why were we about to run 42 kilometres rather than heading home after a night on the town?

This was made even worse by the fact that our meeting point was an Irish pub called Frank Beer. Temptation, thy name is cerveza.

I’ll spare you the gory details of our time in Frank’s but needless to say, a lot of people had made it their pre-marathon caffeine and…subsequent…lightening spot.

Anyway, on to the race. 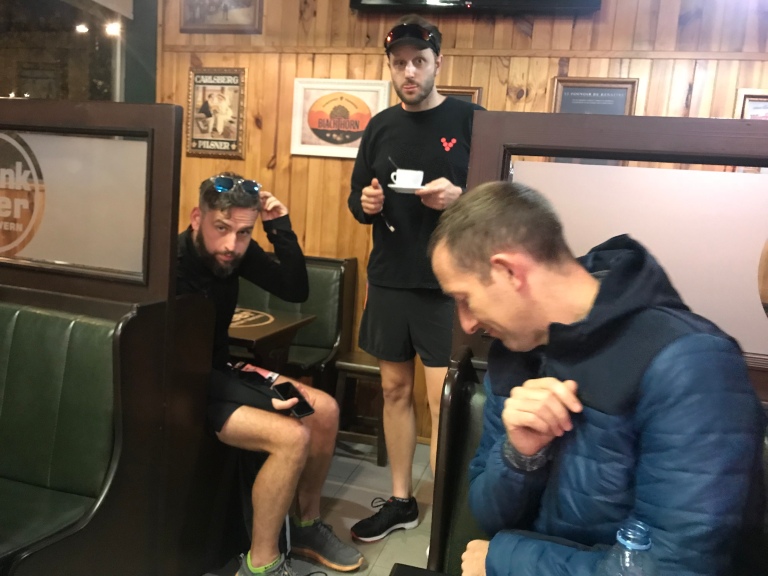 After easily the quickest bag drop in history, we said goodbye to the quicker ones in the group and headed back towards the pink and brown zones.

We’d been told beforehand that Valencia was particularly strict on getting into the various cabals. In truth, it was chaos. The crowd outside the race pens were desperately trying to get in, breaking through the barriers and streaming in. Those who had already got in, were actually fighting back the tide, blocking the impromptu entrance and trying to fix the wall. Just like Canute, they failed and the human tide flooded in, regardless of bib colour.

Inside wasn’t much better. I have never seen such levels of blatant urination. Ladies and gents in equal measure – gender equality at its finest. Let’s just say the plants were well watered.

Somebody, some way away shouted something and we began to jog, before the inevitable walk, then jog, then run that happens with most big races.

The crowds at the start were already brilliant, the music loud and weather pleasant, if not slightly warm. As opposed to the idiots at the front, Luke and I had decided to bring the fun bus to Valencia. Un coche de fiesta. Or a severe lack of training as it is sometimes known.

We’d get round. It might not be pretty but we’d do it and enjoy it.

The route headed out to the port, past the Americas Cup infrastructure, mega yachts and the beach. Despite what the official reports say, it was already 19C as we got to the beach and wistfully passed within metres of our villa. The crowds continued as we went past the Uni and looped back. We spotted George slightly behind us and then picked up El Al Gal who was having ankle trouble. 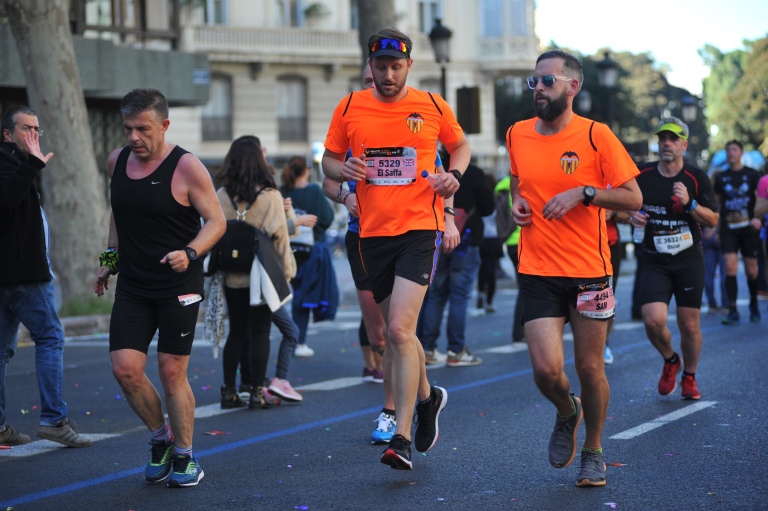 Every step we took, there was something new or interesting to distract the senses from the pain in our legs. The smell of Sunday roast here, a flash of modernist architecture there and the sound of Queen around every corner. They bloody love Queen in Valencia.

First loop done and back past the finish line. Luckily it was on the other side of a building or we might have just stopped. Instead we ran alongside the impressive Jardin del Turia, with sculptures at every junction and medieval mixed with modern.

By this point, we were both a bit tired. Nothing drastic but it was touching 23C and there was little shade, despite the orange trees lining the avenues.

Walking through the drinks station, we passed the Mestalla stadium and towards the old town. We ran slowly past some fantastic groups of supporters – an Arthurian troupe, a class dressed as KISS, ladies a dancing and more drummers than erm…something to do with Birdseye.

I’d love to say that it passed in a flash but it didn’t. You should never, EVER, underestimate the marathon distance. I’ve run 1300ish miles this year and it was still probably harder than anything apart from the SDW100.

If it’s possible to be happy grinding out a result, this was it. We walked when we wanted, not when we needed. We drank the Powerade, looked at the Cathedral and kept going, one 5k at a time.

The final few kilometres were special. Back out of the old town, the crowds narrowed and it honestly felt as close to the Tour De France as I will get. From behind my mirrored shades, I could look straight into the eyes of every fan just feet away from me. It was a constant, incessant wall of noise and support.

In our bright orange Valencia shirts, we received massive support (and the odd insult from Levante fans) which just kept us going that little bit more.

Suddenly, there was a sign saying “800m to go”. Where on earth had that come from? Surely it wasn’t that close. The incredible Santiago Calatrava behemoths stood towering in front of us and yet somehow, with every step we seemed to get exponentially closer.

Down a ramp, the only incline or decline I could remember on the course, and then we could see the finish. I didn’t even look at it, I knew we were within our rough goal of 4 hours so tried to soak up the most stunning final yards to any race I’ve ever done. The crowds, the architecture, the feeling of walking on water. Joined at the hip for 26.2 miles, Luke and I crossed the line in an awkward running hug that only two super hetero-dudes can.

Apres (I don’t know the Spanish for this)

Nothing says you have tried hard than your vision blurring for a few minutes after a race. It was hot, very hot. Too hot for an Englishman in December. But we got round and for the most part enjoyed it. Actually I loved all of it. I want to go back now. The crowds were second only to London. The views, second to none.

None of it could’ve happened without Jersey’s best tour operator, Simon Finch. Tourism’s loss is our gain. To the 12 lads that I shared the weekend with, thanks for being absolutely spot on. To Tim, gutted.

If I’d trained a bit harder, it could have been a PB. Instead, I count it as a life PB. Four hours of some of the best things that humanity can create – buildings, beauty and spirit.