Last year I decided I wanted to run the Glen Coe Skyline route on my own as it looked epic so I emailed TalkUltra host Ian Corless to ask how easy it would be.

To his eternal credit, he didn’t laugh in my face when he probably should have. Instead he simply explained that the some of the scrambles were very technical and I might want to practice first.

And this is when I was introduced to Charles Sproson – part mountain goat, part Lakeland Yoda. Charlie founded Mountain Run, a company specialising in scrambling and running courses in the Lake District and organisers of the Scafell Sky Race and the Lakes Sky Ultra. 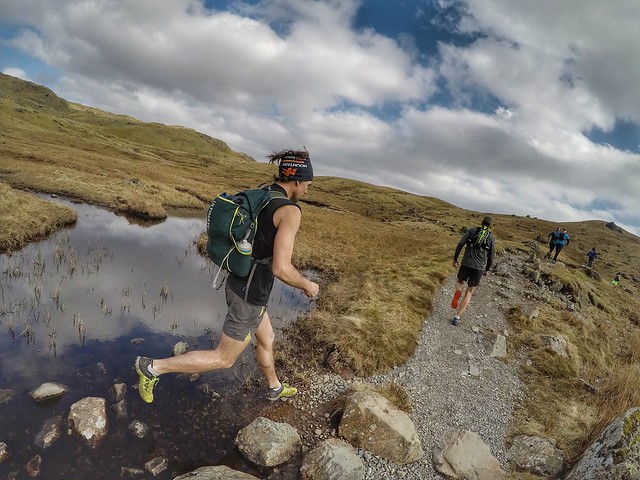 For less than the cost of entering the New York marathon, I soon found myself stood on top of Harrison Stickle, with a compass and map in my hand, staring at the Stickle Tarn and the imposing cliff we were due to climb the following day, Jack’s Rake (or was it Jake’s Rack???).

Flying into Liverpool from Jersey on a Friday night and negotiating my way along the M6 in a rented Fiat 500 was never going to be easy and sure enough, I arrived at the Great Langdale Bunkhouse just after everyone had left for a shakeout run. 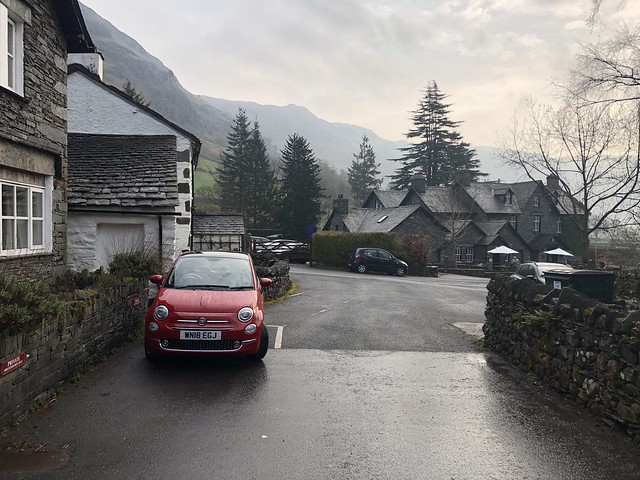 Oh well, I’d have to console myself with a pint of ale from the National Trust’s only hydro-powered pub. It’s tough being green.

After a while, and a second pint, another latecomer joined and we chatted about why we there. Turns out Chris had decided to run a challenge a month, including the Scafell Sky Race, despite having only taken up running very recently.

I felt ok that I wasn’t going to be out of my depth on the running side but was a bit worried about all the other elements of the weekend when up bounced seven very muddy, runners.

Over another pint or three, we introduced ourselves and began to unravel a variety of experience and ability but with one common thread – “the mountains were calling, and we must go”.

I am not a morning person and never will be. But anything was going to convert me, porridge, pastries and yoga in a barn in the Lake District before a day of running in mud would probably do it.

Shelley Barlow, a seriously accomplished skier, mountain biker, runner and all-round bad ass, brought a down-to-earth and practical approach to yoga, which is often missing. By starting with the sports side of it, none of us felt out of place or uncomfortable, despite a lot of grunts and giggling.

Then we got serious. Compasses out, it was time to learn map skills.

It might not seem fun or necessary, but Charlie’s anecdotes made it abundantly clear how much falling off a cliff in zero visibility would be even less fun.

After a small lunch, we packed our packs and headed out onto the trails, eight mountain noobs clutching our maps so hard it made our thumbs sore. Still carrying a cold, I took several opportunities to check my bearings (literally), cleverly disguising my wheezing by looking up at the peaks and then down at the map until it had subsided. We also did some light scrambling to prepare for the next day. 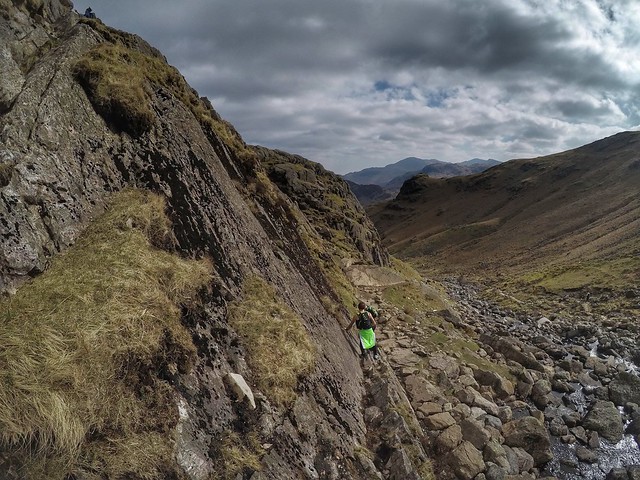 For those, like me, who haven’t the foggiest what scrambling is, it’s basically climbing where you don’t need equipment. Scrambling up rocks rather than actually climbing the face of a mountain, Wikipedia says it’s “a walk up steep terrain involving the use of one’s hands” but that sounds lame. It does make for awesome pictures though.

There actually hadn’t been much running though so once we had reached the top, like a pack of dogs, Charlie let us off our leads and we skipped from rock to rock through puddles and streams and over anything and everything we could find.

This must have only been for 10 minutes or so but there is something liberating about having THE ENTIRE LAKE DISTRICT to play in. Not just a single track, or a park or a road, any direction we wanted to go, we could. We reached more peaks and bounded back down, curving our way towards Stickle Tarn (lake) over slippery rocks and around bemused walkers. In the whole day we cover only five miles but it was some of the most spectacular scenery I have seen. 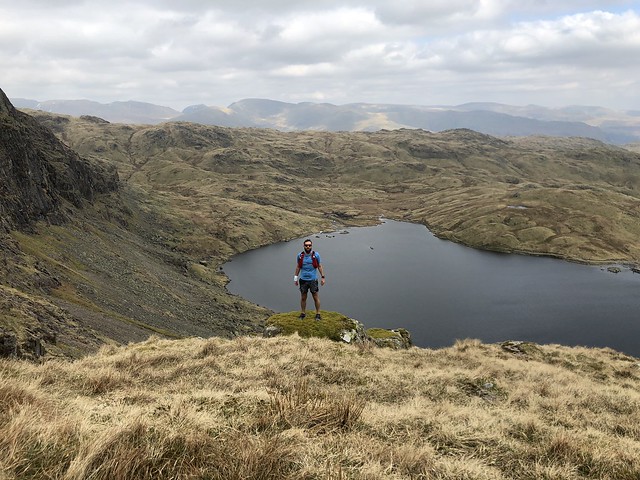 We ran round the lake, practicing our ascents and descents as we went, getting muddier and muddier before meandering down the side of a waterfall and following the babbling brook home.

At around this point, I began to think I was Bob Graham and flew off track with Matt close behind. My feet glided across the soft peaty surface but as I tried to slow down, bambi-like, my legs chose to go in different directions. For a moment I thought I had managed to style it out with a knee slide before a rock, which had no business being there, chose to halt my glissade in a confrontation with my shin.

Hospitalisation and potential amputation were narrowly avoided but I did sterilise the wound with liberal servings of alcohol, administered orally, followed by watching Unbreakable (the one about Western States, not the M. Night Shyamalan film). This is my kind of weekend.

Another spectacular breakfast, an extra guide and we were off to climb up a waterfall. And this was only the warm up!

We learnt to judge footholes and what not to hold, wedging soft shoes into cracks while searching for safe ground. Avoid slippery rocks because they’re…slippery and always keep an eye on where you are going. 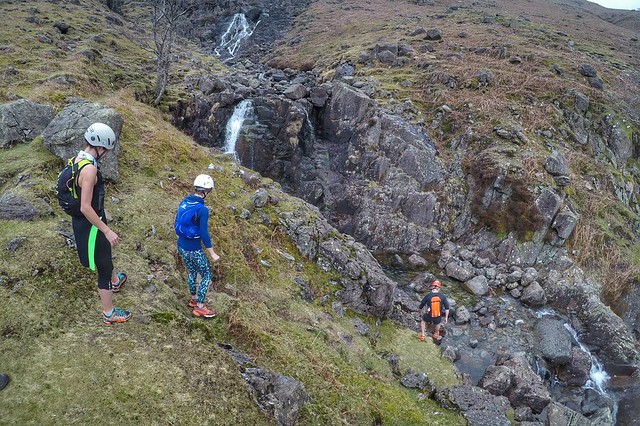 All pretty obvious, but having Guide Matt (there were now three Matts) and Charles there certainly added security for us newbies. And then, like as we crested the final climb, the reality of our next adventure stood in front like a huge wall of rock. Oh that’s actually what it is. We were going to climb up this:

Stood at the bottom of Jack’s Rake, there is a path of sorts, a creeping crevice that climbs jaggedly up and then disappears into fog at the top. It isn’t simple by any stretch (people have died climbing it), but if it wasn’t difficult, everyone would be doing it. 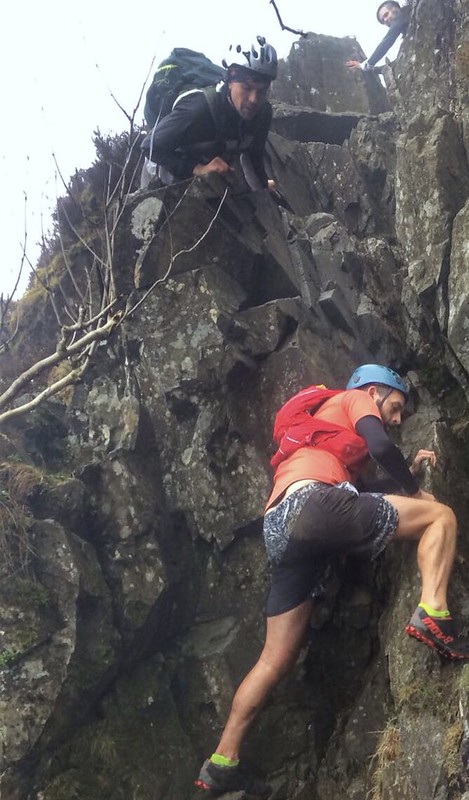 At times there was enough space for all eight of us to stand on a ledge while others it was single file up a climb. My Garmin noted that I dropped to a pace of one mile an hour…

But the views! And the feeling when we got the top was UNREAL. It was such a massive buzz to look over 2000ft down on the lake below and the valley below that.

We stood victorious together and began back down a more sane path home. 700 metres climbed and descended before we’d even got to midday and we hadn’t even reached the high point of the day (literally). 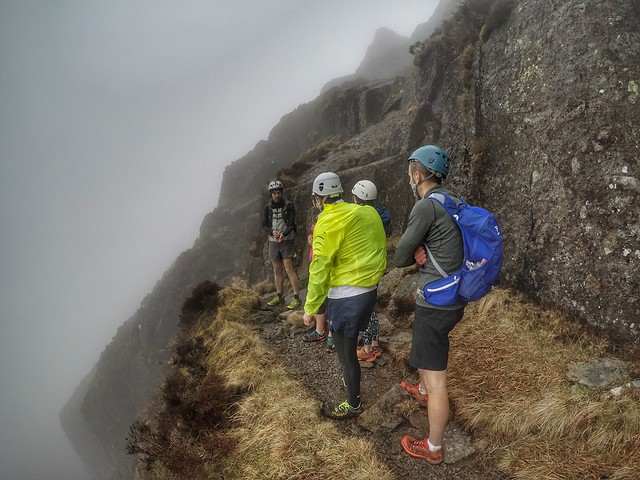 A quick clothing change, ditching of helmets and a quick resupply and we were off along the valley towards Esk Pike, running at a more familiar pace and stomping through puddles like a schoolboy.

Here, we were at the bottom of a huge natural bowl, with rocky peaks watching over us and clouds swirling around, threatening to release their anger. As we started uphill and began to hike, the rain began, slowly forcing each of us to put on the waterproofs we were rightly assured we would need. And as we went higher, the weather got worse but the journey got better. 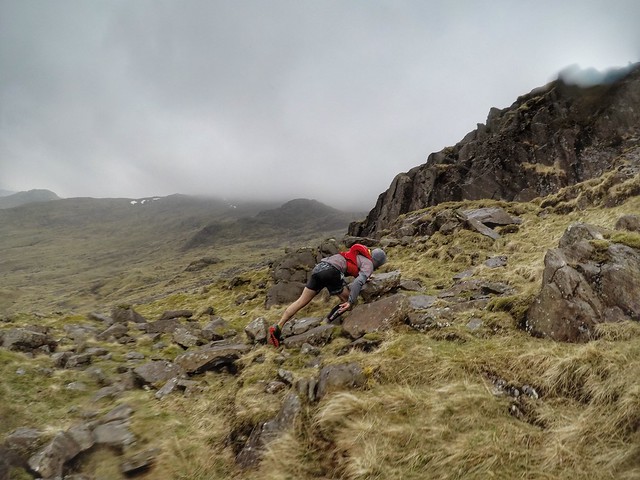 We switched from the path to avoid the dull peak and clambered over boulders and through boggy grass, we held onto plants to stop slipping and slid down scree. We climbed and climbed before hitting snow. WHAT?

Yes snow! In England in April. For someone who is used to sitting behind a desk writing about bond durations and the impact of energy inventories, I was almost giddy with excitement and kept laughing out loud. The strange thing was, Jonathan behind me was doing the same, every couple of minutes saying “this is brilliant”! 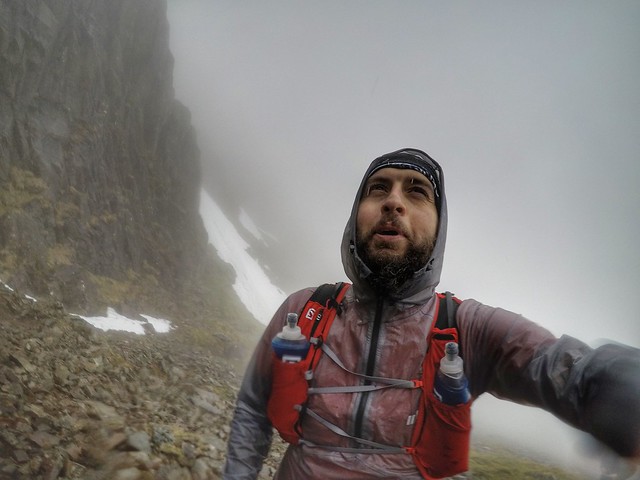 I felt like an explorer, and with visibility shrinking, I could’ve been at any height on any mountain, anywhere in the world. This was the life. My hands had lost all feeling (as I’d left my gloves on the radiator in the barn) and I was still in shorts but I really didn’t care.

From near the top of Bowfell, we began to run again when the teflon-covered stones would allow. I almost repeated my fall from the previous day, this time the fault of a black mud which seemed to be the kryptonite to my shoes. 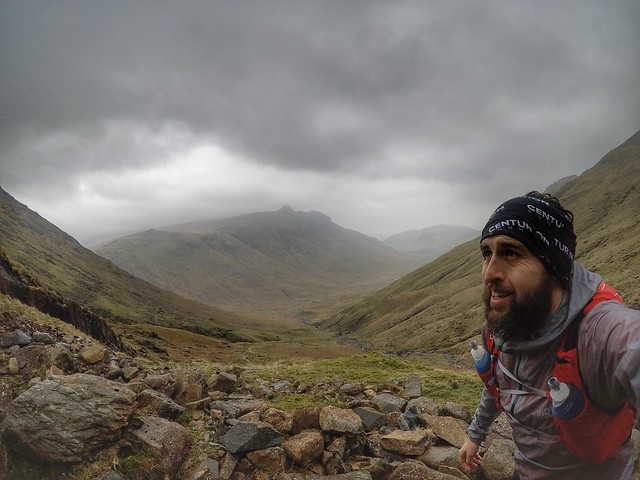 And just like that it was over, we were sat in the pub where it had begun for me (and to be honest most good things start in pubs). There were journeys back to Sussex, London, Dorset, Hampshire, the Cotswolds and somewhere up North (sorry Matt). I was going to stay in Ambleside and fly back the next morning.

I didn’t want to leave, and I certainly didn’t want to be on my own but 400 Whatsapp messages and 300 photos from my new Skyrunning buddies meant that the weekend could continue on for at least a little bit longer.

I might not be ready for Glen Coe just yet, but I’m already planning my way back to the Lake District! 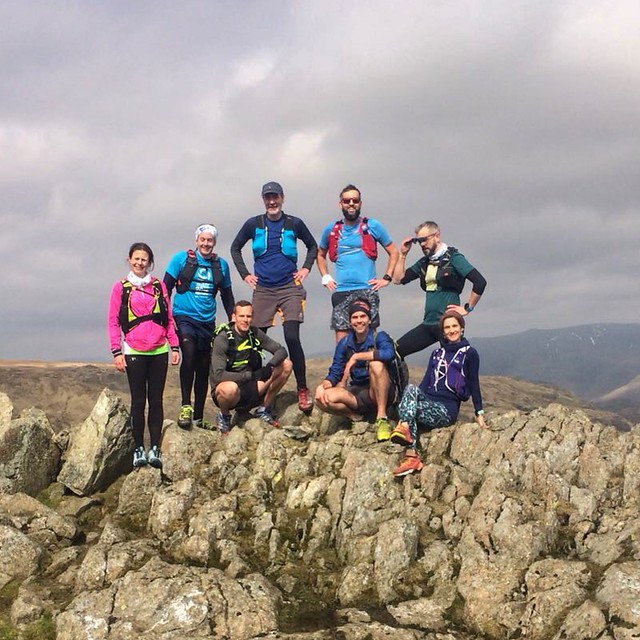