Like most good ideas, this one started in a restaurant over gin and wine – what’s the quickest route from the top right of Jersey (St. Catherines) to the bottom left (Corbiere)?

Simon and I sat in The Butcher’s Shop in Johannesburg (which actually did an amazing veggie meal) and pondered without using Strava, Google Maps or planning your route in advance, which way would you go? As the crow flies, avoiding hills, across the beach? And how long would it take? He is a Jersey local and quicker than me so there would have to be some kind of handicap system involved.

And so yesterday, just over a month since that night, 14 people of mixed abilities genders, local knowledge and hangovers huddled together at the end of a pier waiting to set off, each with their own thoughts on direction and distance. 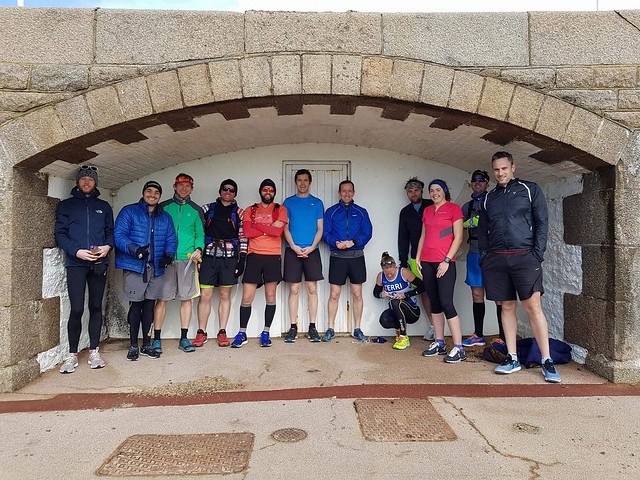 Simon had staggered the start times based on everyone’s previous PBs so we should all arrive at similar times. And just after half twelve the first runner took off. I was very much mid pack so had to wait for a few to leave before heading off, some upbeat mid 90s rock accompanying my sunny first steps into the unknown.

This is where the beauty of the race format really hit me. I knew that there were six or seven people in front of me but couldn’t see any of them and knew that in two minutes the first of the faster runners would be setting off to catch me so I knew I had to run quickly but with no clue how long I would be running, I had no idea how fast to go.

One thing I did know was that with Mr Farley chasing me, I had no choice but to run up St Catherine’s hill, barely a mile into the race and in some unseasonably warm weather, I instantly regretted my snood, buff and gloves, along with the decision not to bring any water.

Up the hill and a cheeky straight-ahead rather than keeping on the main road in the hope that I could gain precious seconds proved a winner as I saw Tim and Alastair run past the end of the road. They’d set off together, for moral and hungover support, so once I’d seen them, I thought I’d soon be able to overtake them. 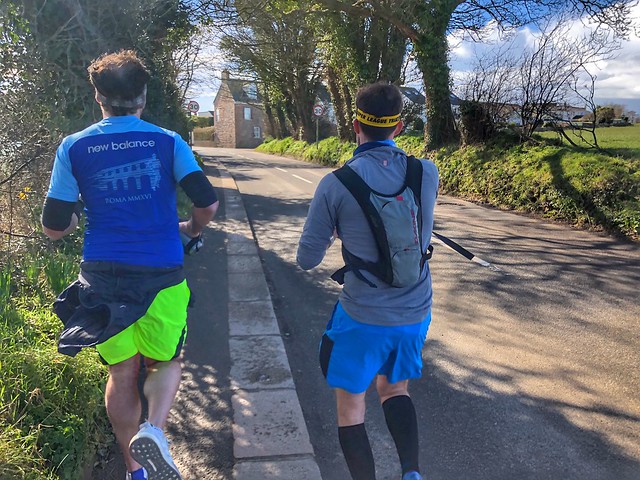 It actually took me a considerable amount of ninja-style silent steps to actually pull level, during which time I amused myself by taking pictures without them knowing. When I finally did catch them, I couldn’t work out if they were annoyed I’d caught up, happy for the additional company or just regretting the whisky and negronis the night before…

Either way, when they stopped at the Co-op for a comfort break, I was back out on my own, heading towards town, and even better, it was downhill.

The weirdest thing about being in a race with no set route is that you have no idea how you’re doing. I could’ve have already been passed by everyone that started after me and wouldn’t have a clue. Likewise, but much less likely, I could’ve taken a perfect route and overtaken everyone who had left before me – the possibilities were mind-boggling.

Until just after Springfield Stadium when George and his bright green compression shorts came flying past. I was never going to catch him with pace so I ducked in and out of the backstreets of St Helier in the hope that I might chance upon a quicker route. Instead, I came out onto the waterfront, only to see him heading out across the low-tide sand, heading straight for St Aubin. Should I drop down to copy him or hope that the wet sand would eventually tire him? I opted to stay on terra firma and prayed he might stumble into some temporary quicksand.

While I was continually watching him get further ahead, I suddenly saw Mike also running ahead of me on the sand. Where the hell did he come from? Had he got a bus??? 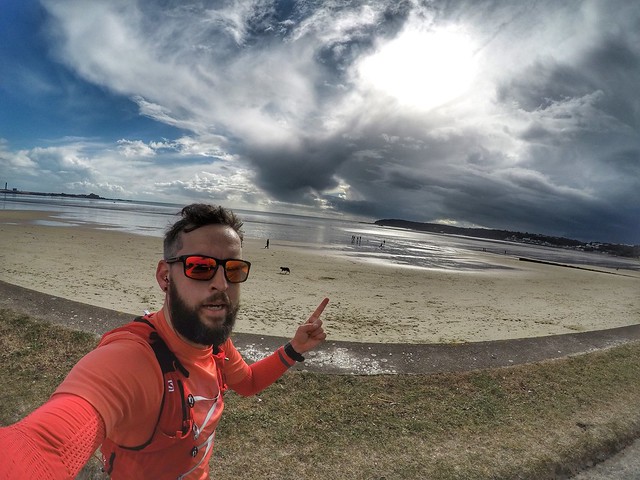 By the time I’d got to the far end of the bay, Mike was nowhere to be seen but George was just ahead of me as we started up the railway walk. And in front of him was another runner, Neil. By this point I’d completely forgotten who set off when but knew I would need try and get round them both.

The ace up my sleeve was cutting to the left halfway up the railway walk, then along the road past the Lavender farm and Waitrose rather than the trail. It would be less scenic but would be better underfoot, more direct and could make all the difference. I’d actually got the idea from Mike and Simon at dinner on Friday so felt very pleased with myself.

Until the pavement disappeared.

Jersey has a habit of only putting pavements on one side of the road, then switching sides, or sometimes just stopping randomly so you have to run into oncoming traffic on a blind bend. Not fancying a game of chicken in the increasingly wet conditions, I turned down an alleyway that led past back gardens to a cul-de-sac where I then had to climb a fence and tread through mud, undergrowth and dodge trees just to get back onto the railway walk.

I popped my head out and spotted George off in the distance to my left (my Strava flyby showed I’d managed to pull level just before this) and Terri about 200 metres behind me to the right.

Pulling my now soaked shoes from the weeds, I dropped down and started running as fast as I could to catch up. It was no good though. My urban exploring had cost me, possibly the victory, but I thought I could hold on to second place at least. 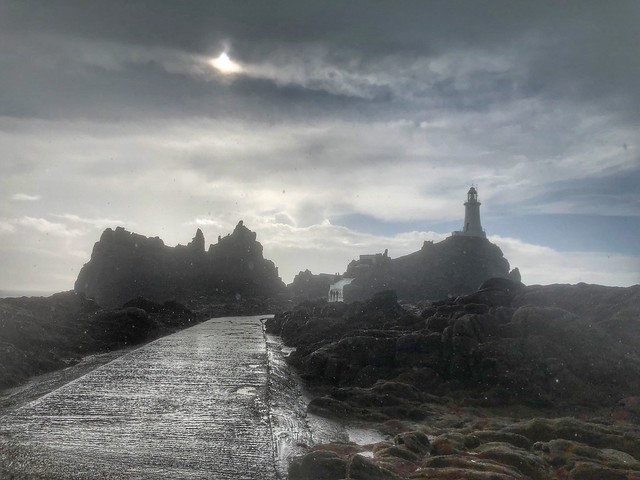 The descent to Corbiere lighthouse is easily the most stunning finish to a race I’ve ever been at. The road gradually drops away to reveal the jagged rocks of the west coast, swirling seas all around and a meandering causeway out to the white beacon among ominous clouds.

Among these rocks, my dreams of a podium finish were also dashed. I could see at least one other runner on the causeway and a group gathered at the lighthouse gates. Still, it was a brilliant feeling to run across the sandy path and reach the end. I think I was 6th but it didn’t matter, it was just fun to get there and then discuss who had seen who, which route had been taken and what mistakes had been made. 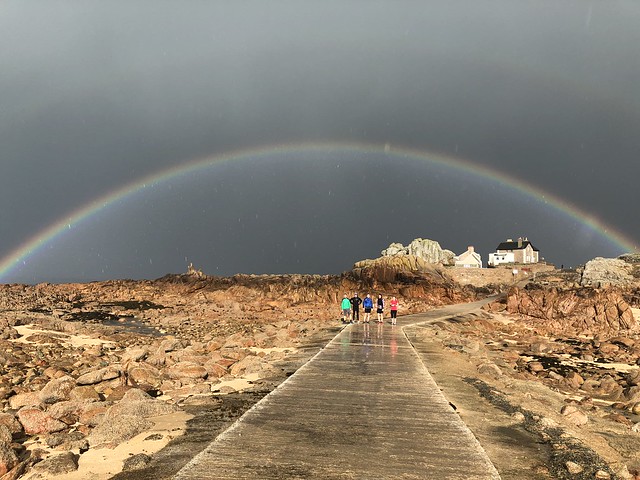 We clapped Pep, Terri, Neil and Simon over the line before heading back to the mainland and a well-earned lunch. Tim, closely followed by Alastair came over the hill, just as a stunning double rainbow lit up the sky over St Ouens.

Triona finished while we were sitting down to a victory beer, lunch and the presentation of the Meerkat trophy to Rosie, but there was just one question. Where was Decio? 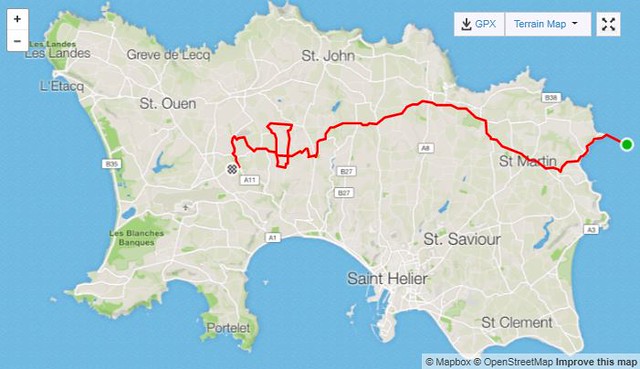 Turns out he had run nearly 8 kilometres more than everyone else, including a penis-shaped loop before his phone ran out of battery.

What other races can claim all of that and a view like this to finish??? 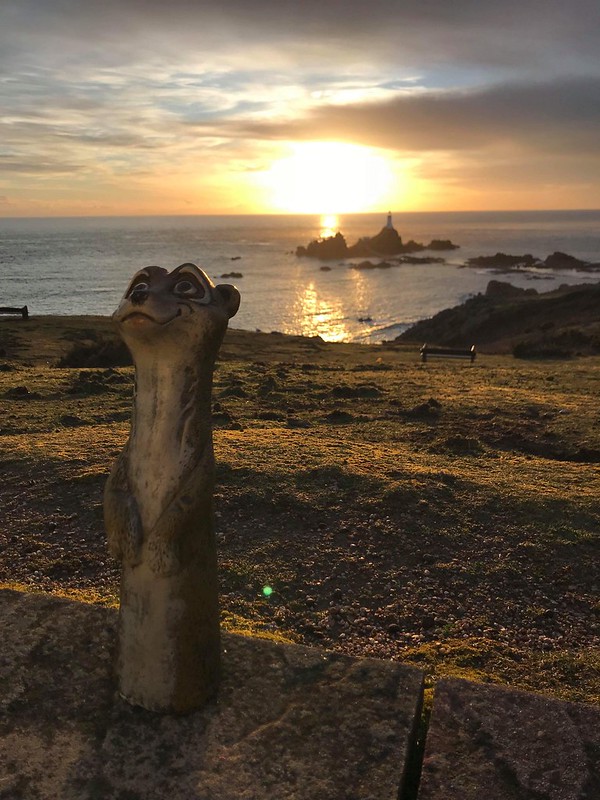