I tried to look for a suitable quote to describe being “home” but all I found were schmaltzy, pastel-coloured, calligraphic Pinterest-fodder about love and hearts and families. Bleurgh.

Southampton will always be “home”. No matter where I’ve wandered in the world, there is no feeling more homecoming to me than leaving the M3 at the top of The Avenue, getting off the M27 at Hedge End or trying to work out if my lift would be waiting on the Toys R Us or Mayflower side of Southampton Central.

But that doesn’t mean that it was all sweetness and light. For 21 of my most formative years, Southampton’s streets were the stage on which my own melodramatic play unfolded. Through schools, first jobs, teenage angst and heartbreaks, bars and clubs of varying repute in “town” and hundreds of places in between, an emotional GPX route of memories winds its way around the city.

This weekend was the first marathon in Southampton since 1984 so there was absolutely no way I was going to miss it. Well unless I got into London but then the chances of that are up there with me taking a training plan seriously or only staying for one drink.

I actually hadn’t followed a plan at all for this marathon, but then it was part of a long SDW training week so I figured I would just try and enjoy it. I also realised that of the four marathons I had previously finished, I didn’t enjoy one of them. They were amazing experience and I was proud of my achievements or other people that I was with but as I crossed each finish line I thought never again. Until the next one.

It was a still, cool and misty Sunday morning as I set off over Northam Bridge to walk to the race village near the Guildhall. Perfect weather conditions for a marathon and I was feeling good with a belly full of peanut butter bagel and porridge.

The baggage drop was lightning fast again and I was soon hanging around the start line. I saw a couple of faces I knew and chatted to Ian and Emma for a bit before heading to very front, among the skinny vest-wearers to wish Duncan, resplendent in his bin bag outfit, good luck for race. Unlike me, Duncs is actually very quick and ended up coming 13th as well as having his picture taken stood behind the Mayor.

Before I headed back to the safer surroundings of the four hour runners, I was told off by an official for having my number pinned to my shorts. Apparently it was illegal and I would be disqualified!! As much as I wanted to argue, I couldn’t be bothered and after initially being a little officious, the marshal in question was actually very nice.

The runners were chatting and in good spirits as we went through the usual routine of counting down, hearing the hooter and then not moving for a minute before heading off and out.

This year, the course had been reversed and altered slightly, looping twice for marathon runners which meant Itchen Bridge twice. In reality, the biggest ascent on the entire course comes right at the beginning of each lap as you leave the City Centre and head past the former sites of the Dell and the County Ground (and my paper round), before heading up through the Common.

It isn’t a big climb but it is gradual and long so I tried to heed the advice I usually ignore and took it easy. From the highest point at the top of the Common, it was basically downhill for nearly four miles before flattening out (Itchen Bridge is the little blip just after mile 10 and around 25 in comparison).

So as we turned back towards The Underpass, I tried to use as much gravity as possible and pick up any time I had lost. We ran past Eggy’s house then down the picturesque Highfield Lane before dipping into and out of Church Lane which seemed a lot harder than last year due to the reverse direction.

Up and through the University of Southampton where I temped for a couple of years after realising I hadn’t tried very hard at Uni and nobody wanted to give me a real job. The course then turned right past the School of Engineering rather than continuing to Burgess Road as it had done in the past two years. Although I was glad that we didn’t have to run up it, I remember it having a great atmosphere and loads of people out cheering. At this point in the morning (around 9.45), most students weren’t out of bed so the course was a little quiet.

Luckily, this was where Chris and Charlotte had decided to turn up and I broke into my best, humorous exaggerated running pose as the smartphones pointed my way. Then on the corner of Upper Shaftesbury and Welbeck, Louise was cheering me on with Theo in her arms. He needs to work on his high five technique but since he is three, I’ll give him a break.

Further down Welbeck, past Big Georges chippy, under Thomas Lewis Way and over Cobden Bridge to a very green Riverside Park. The turn into the entrance was quite tight and organisers had made efforts to make it easier but a sharp left followed by a steep decline and quick right hand turn would’ve been hard for anyone going quicker than me (and there were a lot). It also made it hard for a wheelchair athlete I saw struggling to negotiate with the help of a #milemaker.

The park was full of people leisurely enjoying their Sunday and looking, then cheering in bemusement at the stream of people running past. Along the river to Woodmill, a hairpin left around the bin and past the skate park before heading back to The Triangle.

It was around this point that I realised I was really enjoying myself. Not just athletically as my aching limbs had finally warmed up, but just enjoying “my city”. Bands like the brass band playing “Oh when the saints” on the Common and the Sea Cadet band drumming in time as we turned back towards the City Centre. Or the man dressed as St George overtaking me through St Mary’s stadium and the thousands of people who lined the streets to cheer. Even Itchen Bridge wasn’t too bad as I headed over it and back before heading up to the Bargate.

Then, I passed the finish line. Or more accurately, I passed parallel to the finish line which was hidden by a building, and carried on for a second loop. I was fully prepared for this psychological blow but some of the people around me struggled slightly more. Those first few turns around Bedford Place were harder and the streets seemed quieter. Cars were ignoring the road closure signs as if going slowly through a marathon event with hazard lights on made it any better.

But once again, get to the top of the Common and it was all downhill. It was also all a countdown in terms of miles and though I was still enjoying the incredible enthusiasm of the #milemakers (especially the one at the top of Omdurman Road), it was good to be able to tick miles off slowly. 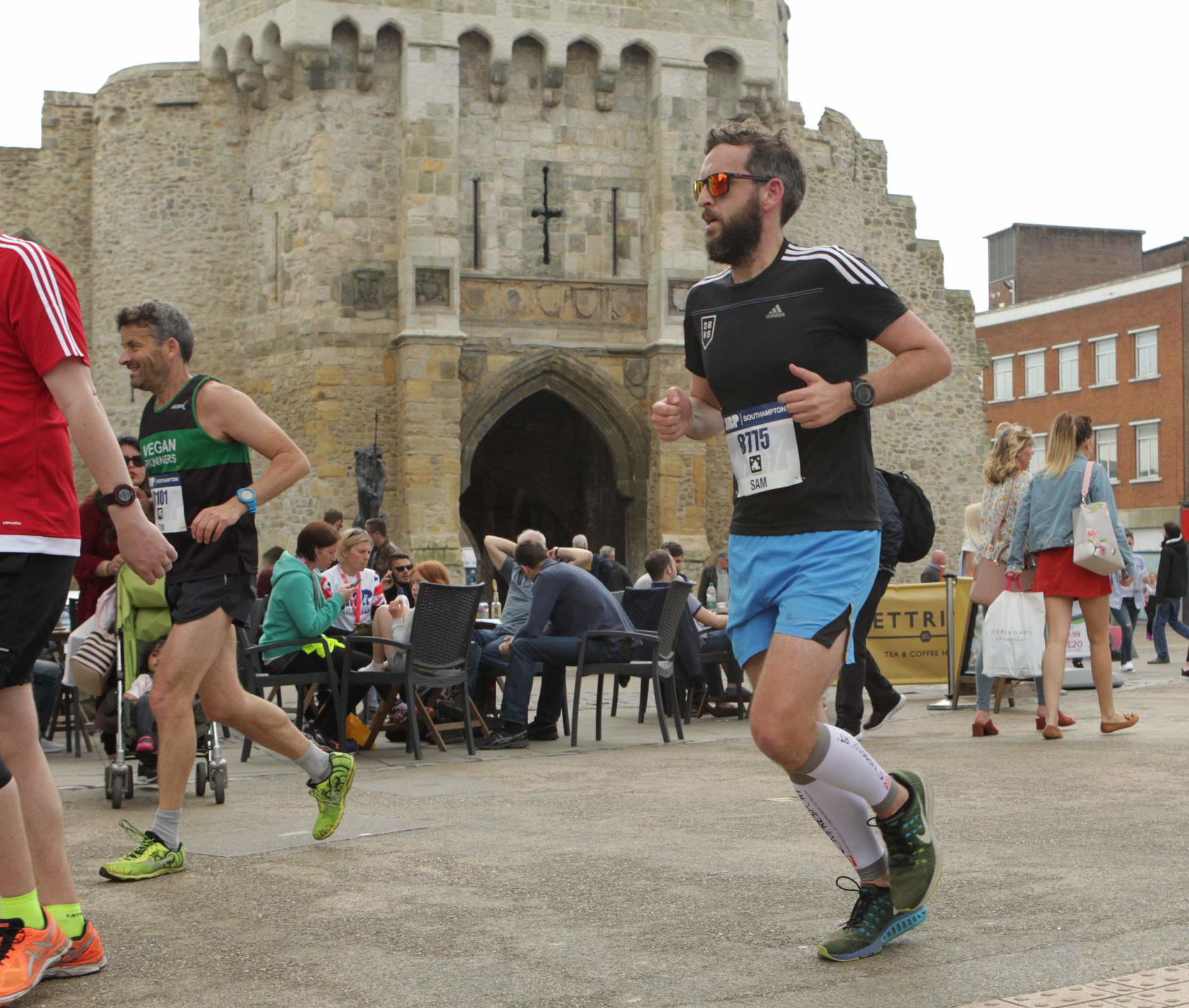 The kids had obviously got fed up but Lou had stuck to her cheerleading task and shouted me off down to Cobden Bridge before Steph, Olive, Will, Jo and Oliver were waiting at the top of Riverside Park. Then Martha surprised me as I headed onto Manor Farm Road before Ru and Bri popped up near the bakers.

It was now very warm on the course so couldn’t handle the sickly sweet Lucozade Sport and gel when I saw my mum and Chris standing near the ukulele band shortly after. It would be yet another race where I had been prepared before refusing all fuel.

Second time round, Itchen Bridge was not fun. No fun AT ALL. But I was enjoying (sorry) the fact that I had conserved myself enough in the early miles to keep running which meant that I was able to overtake a fair few people.

This lap, I was allowed to left at the Bus Station and up onto Above Bar before turning right towards the finish. Usually I would sprint it but as I looked down the street, the crowds were standing on the road, cheering and shouting like the Tour de France. It felt like I could’ve reached out each side and touched both lines of people. So I just enjoyed it. Past KFC, the Square Balloon and Subway to the finish, applauded and encouraged the entire way.

I’d made it. I’d made it in a personal best of 3.53.21. More importantly I’d made it with a smile on my face. It was the first marathon that I had finished and not felt terrible.

I honestly can’t thank the people that stood on the pavement enough. At every step someone was shouting support or waving us all along. The banners and signs were amazing and there were so many sweets on offer from the public I’ll be surprised if someone doesn’t need a filling or two afterwards.

A quick pint and taxi ride before I was in the Crown in Highfield surrounded by friends and family. It seems fitting to be in a place that I spent so many Sundays although nobody was sticking around for the quiz this time. A hill of nachos and two pints later, I was spent.

Home is all sorts of things to all sorts of people and can’t be summed up in an Instagram post or on a piece of driftwood with letters burnt into it. It is the memories you make and carry with you, wherever you are. Oh and Retro sitting on you while you sleep.

One thought on “ABP Southampton Marathon 2017”