Sometimes life inevitably throws a spanner in the works of your training schedule.

In Marseille, it was the first time that it had worn a balaclava, thrown a glass bottle and followed it up with tear gas.

The European Championships are being held in France this year and unsurprisingly, nobody I knew got tickets in the ballot.

Instead we spent what felt like days pressing F5 and whatsapping the group to see if anybody wanted £200 tickets for Iceland vs Austria.

And then somehow, we managed to get tickets to an England game. The actual team we all supported. And in the south of France so it would be hot. Could it get any better?

Unfortunately it coincided with a weekend of back to back 25 milers on my NDW100 training plan but I figured my legs could probably do with a rest anyway.

So me, my two brothers and Karl set about finding accommodation and transport to Provence and it turned out that unless we wanted to spend a King’s ransom, we would have to get creative.

Which is one of the reasons we ended up on a station platform 690km away in Alsace trying to find a hostel after our overnight train was cancelled.

As I wasn’t going to be training, I had taken the opportunity to have a cider or two and a beer or three whilst making our way towards the French/Swiss border.

Now with an emergency overnight stay booked, I could relax and try the local ales as well as the best French vegetarian cuisine on offer.

Pizza. And chips. Or frites if you’re being pedantic.

After watching the French national team win their opening game, we walked around the town for a bit trying different pubs and even a tango festival (the dance not the drink).

Allez
Much fun was had by all which made the 7am wake-up even worse.

We set out for the south of France stood in the TGV’s buffet car but, thanks to my exploration of Belgian bieres, I was soon sat on my bag, sunglasses on, head resting on a bin.

The train was warm, packed due to the previous cancellations and next to us were some overly loud (at least for my sore head) Swiss-German England supporters.

Yes apparently that is a thing – they sang more chants, drank more beer and wore more England tops than we did and had  even heard of Southampton’s Canadian-German chairman, Ralph Krueger.

So when in Rome or wherever in France we were at that point in the morning, we did as the Swiss-German English did and got a beer!

If nothing else, on this trip I was enjoying just being part of Europe – if only there was some way that I could express that feeling in a grand gesture…

La Marsellaise
At one point, I had actually contemplated trying to get my long runs into the weekend by running around Marseille.

The area surrounding the city looked beautiful and also had a good set of hills but a lack of time and inclination meant that the Garmin didn’t make the trip with me.

Getting in at midday meant that I felt somewhat vindicated in my decision especially after what happened next.

We had been warned about Marseille since we’d thought about the trip and as we got closer to our final destination, more stories were filtering through to us about trouble with England fans, locals and the police.

So when we turned up at a sunny Gare de Marseillle Saint Charles, we were shocked to find that there was no tense atmosphere and we enjoyed a short, pleasant walk to our cool little hostel.

Even as we headed to the port and the old town though some quaint back streets, the only sign of any trouble were a few broken glasses.
In the port itself, one pub was overspilling with England fans chanting away but they were generally in good spirits and all occurred under the watchful eye of the Gendarme.

Every single pub and restaurant was adorned with the cross of St George and charging prices for terrible beer that would make an Oligarch baulk.

But just two streets over, we sat down among some locals at Restaurant La Marmite for a beer and the best French vegetarian cuisine on offer.

Pizza. At least this place had a Trois Fromage as well as a Quatre Fromage for a bit of variety.

By this point, we had heard about more trouble in the town which still seemed to be very quiet to us so we decided to head to another bar closer to the stadium.

Merci
After this next pub, we gave up on finding the fanzone and stopped to quench our thirst and visit the little boy’s room.

It was getting busier with fans heading to the Nouveau Stade Vélodrome and there was a queue for both but we decided to we still had plenty of time.

I came out of the gents and shared a joke with a couple of England fans in the bar before heading outside to meet my brothers and Karl.

As I walked out, there was a noise on my left and I saw a man running towards the bank branch adjacent to the bar. Somebody ran past him into the pub and an object flew after him, hitting the wall next to the door. The first man had fallen over on the small steps in front of the bank and from the right, a man in jeans and a white t-shirt came from nowhere before kicking the prone man in the head and retreating instantly. At the same time, a green bottle smashed into the terrace in front of me while a metal and lacquer chair flew round the corner, landing next to the man on the floor. More men came running around the terrace towards the bar and two of the windows near me smashed. The whole thing had taken no more than ten seconds and I hadn’t moved at all, I’d just stood there ducking my head slightly. There was sound everywhere but I couldn’t pick out anything distinct, just shouting, crashing, smashing and hard invisible objects hitting into concrete. There was a solid, grey mist in the air and this was the first time I looked around. Jake was stood on my right next to a newsstand, also watching the melee unfolding in front of him. I walked over to him, beginning to stoop slightly as I did so. The mist had now enveloped us and smelt of burning hair. I asked if he was alright and he said yes so we edged behind the newsstand. My eyes were beginning to sting now but I could see more people running past on the road side. There was a policeman with a small, square shield heading after them. As quickly as it had started, it had stopped. We walked back towards the bar to check on Toby and Karl who were safe. The pub was full of walking wounded, with cut limbs and bloody faces but nobody seemed badly hurt. Everybody was trying to help each other, checking that each was ok and trying to find out what had happened. The tear gas had dissipated so we walked back outside and saw the destruction while police sirens wailed along the road towards the stadium. And so, we continued our walk to the match. 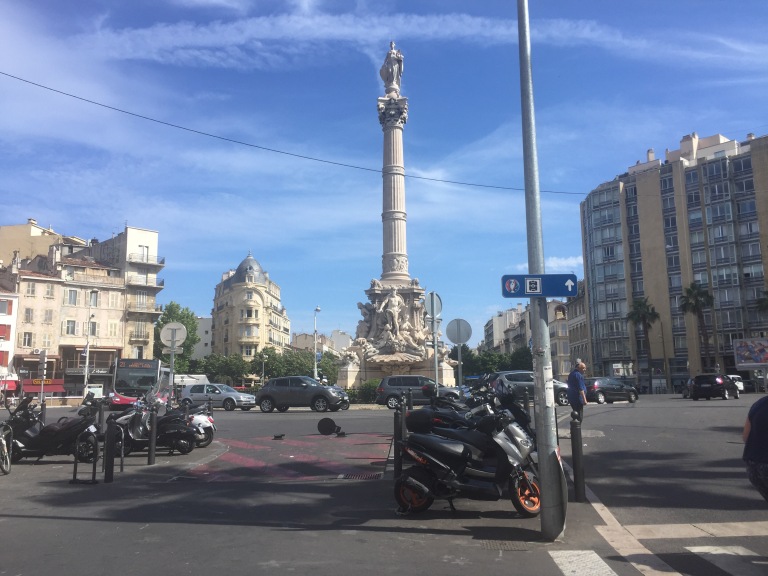 It might sound blasé but it happened so quickly and no major damage had been done so we didn’t think much of it. It was only when I read this article that the potential danger dawned on me.

Of course we talked about nothing else for the rest of the journey but we went on to enjoy the game (and were fortunately not involved in stadium violence).
After the game, we headed straight back to the hostel after a final beer and the best late night French vegetarian cuisine on offer.

Apres
The next morning, the only sign that anything had happened was yet more broken green glass on the floor (the sponsor must be pleased).

Families walked around enjoying petit dejeuner, fans were towing luggage towards the station and there was a ping pong tournament next to the port. 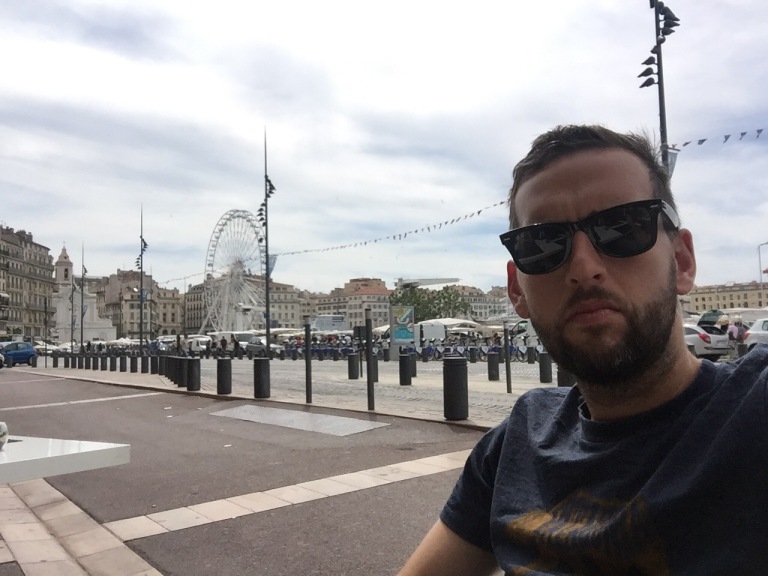 Having got fed up with our food choices so far, we headed to the local Carrefour to get some supplies for the train and ended up with two baguettes, hummus, coleslaw, crisps and of course, cheese and beer.

If nothing else, we remained consistent in our food and beverage choices over the weekend.

The other thing that remained constant was the abject failure of our best laid plans so we once again ended up in emergency accommodation near Mulhouse, this time because of pot holes at Gatwick airport.

I finally made it home at 7pm on Monday night – absolutely shattered, with a lighter wallet, tighter waistband and a chronic tiredness that can only come from bad habits.

If you could write a book on epic training failures, I would be writing foreword, content and back cover.