February 22nd is quite an early start for a Half Marathon.

The seaside weather can be temperamental at the best of times in February and all this week I had horrific weather reports sent to me by those who knew I was running.

Instead of the usual shorts and t-shirt ensemble, I was contemplating running complete with a sou’wester and woollen thermals to brave the apocalyptic elements that seemed to heading to the South Coast. 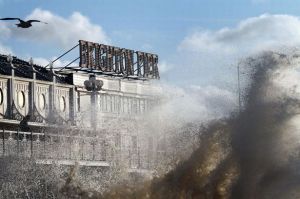 Couple this with last minute changes to my accommodation (I ended up on a blow-up bed on the floor of my cousin’s lounge) and I wasn’t particularly looking forward to the event.

Sunday morning didn’t get better as I woke up late, had to powerwalk to the start line and then, as I desperately tried to drop off my bag and get to my start pen, the pre-race red mist descended.

Madeira Drive, where the race starts and finishes, was awash with frantic runners trying to find toilets, bag drops or from the looks of it, just getting in my way taking selfies.

My rage continued as I thought that I could be doing anything else apart from battling the crowds for the dubious pleasure of running 13.1 miles. Like, being asleep or eating breakfast.

Annoyingly, all of the volunteers were very helpful and enthusiastic so I slowly drifted back to normality via a couple of smiles and good luck wishes and took my place somewhere mid-pack.

The sun was shining and despite a slight breeze rolling in from the Channel, conditions were near perfect. 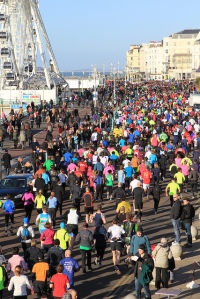 As I was hoping to dip just under the two hour, I had already planned to listen to my favourite 180bpm Podrunner mix and duly plugged in my headphones whilst the energetic announcer counted down to the gun.

One of the downsides of headphones is that you don’t get a feel of the atmosphere but I could see from the smiling faces and colourful banners that the race was well supported and I cheerfully trotted off with the 15,000 other runners.

Brighton is blessed with some stunning views and impressive architecture and the first mile around the Regency-era Pavilion was a perfect start to the race.

After this quick loop, the course bears left up a slight incline along Marine Parade rising above the promenade and away from the hustle and bustle of the city centre.

Roughly two miles in, I began to approach two blonde ladies with glittery facepaint and sunglasses, clearly having a great time.

At first I wondered whether they were stragglers from a Hen party  the previous night but as I got closer, I realised it was my housemate Melissa (off of Lissyruns.com) and her Run Dem Crew partner in crime Michelle running #partypace.

Not wanting to cramp their style (and disappointed that the infamous selfie-stick was not yet in operation), I left them and continued on the 2nd out and back loop past the Marina, the golf course and…a Gothic/biker drum troupe.

The slight uphill in the way out for miles three and four made for an enjoyable downhill couple of miles once I had made a hairpin turn at the end and headed back to the Brighton Eye where the route again crossed and the path set off towards Hove.

The course narrowed slightly along the dual carriageway and I got a somewhere near the feeling of the claustrophobic scenes that Tour de France cyclists get.

As it continued though, the crowds thinned and on the flat course, I made good time and looked to get to the final turn back as quickly as possible.

The weather gods finally chose their time to bless the runners and a tail-wind appeared for the final three miles as I rounded the far end of The Lagoon and back on to the seafront.

Hove holds a lot fond memories for me and I was quite emotional as I ran past the pitch and putt course, the King Alfred Leisure Centre and ruins of the old West Pier.

The rest was all a bit of a blur of sweat and tears as I realised that I might actually get under the 2 hour gun time.

With a final effort, I sprinted as much as I possibly could whilst at the same time trying to high-five as many kids as possible and keep my eye on the clock ticking above the finish line and made it, in true cliché, with one second to go.

Despite my grumpy mood at the beginning of the day, I’d been reminded why I loved Brighton and also why I loved running this race.

The combination of scenery, personal memories and pretty epic support mean that I will be definitely signing up for next year.

For a final dramatic twist, to show just how badly things could have gone, the wind proceeded to pick up to an extent that it broke one of the colourful flags above the sea. 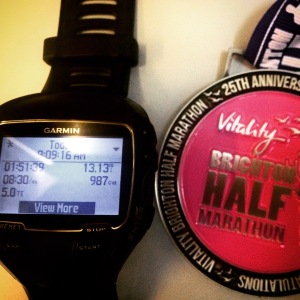