It turns out that since then, I’ve probably run less than 100 miles in three months.

With the Valencia Marathon now 12 weeks away, I thought it was probably time that I laced up my trainers, put down the bottle of wine and go moving again.

The Jersey Spartans Athletics Club Half Marathon 2018 (catchy I know) was far enough to be challenging and had the added bonus of actually imposing some structure on my run – I couldn’t stay in bed or just watch TV if I’d paid money to enter.

So at 6.30am this Sunday, I was up ready and raring to go, in my kit and desperate for a…well you know how rhyming works.

The first rule of running is don’t try anything new on race day. This should actually extend to the previous day as to my eternal surprise, a vegetable Dansak seems not to be the optimal prep.

To cut a long story short, after a number of visits to the little boy’s room, I was still waiting in the toilet block at FB fields with less than five minutes until starter’s orders.

Anyway, back to the race and I bumped into a number of familiar faces in the crowd from parkrun, tri club and just the general Jersey running crew.

I chatted to parkrun and Trail Monkey guru Paul Burrows for a couple of minutes about the targets for the race ahead. We were both aiming around the two hour mark until the race started and he shot off through the gaggle of runners in front of us. So much for that then.

My lack of running meant although I was confident that I would complete the race, I had no idea how my body would react. Some people (including my manager) may not believe me but I also think I have been suffering from post-viral fatigue since July.

So when I spotted Becky ahead in the crowd, I fell in step. Up until the race got to Gorey, I hadn’t a clue where the route went so it was good to have someone that seemed to know what they were doing. We were also both trying out new Hokas for the first time on long runs. 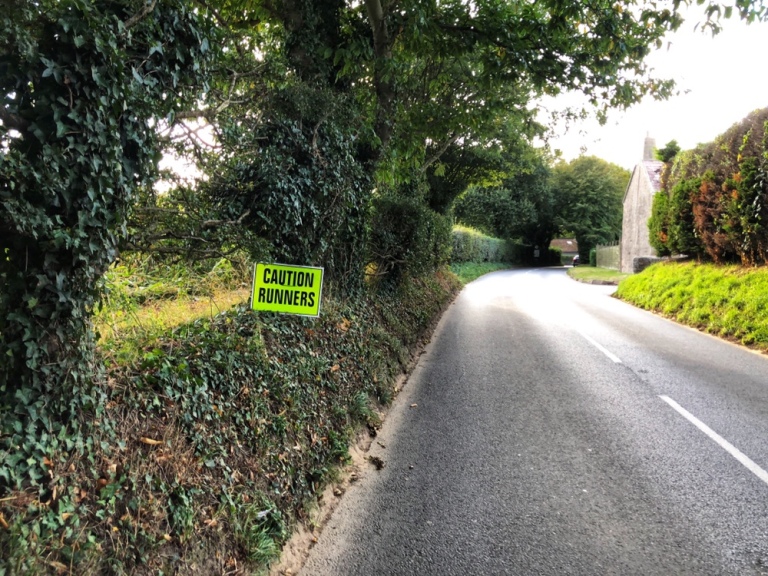 One good thing about being in the dark with the route is that every turn is a surprise and a chance to be a Jersey tourist. Field, field, field, hedge, field, Neolithical ritual site, field, field, church, pub, field, incredibly ornate gates hiding the mansion of presumably a Bond villain, field, field, etc.

In what seemed like no time at all, we had reached a super long downhill where my bouncy Hoka Hupana 2s couldn’t be contained and I took off down the hill like the finish line was in sight.

Of course it was actually 5 miles away in the increasingly hot Jersey heat so I stopped briefly to find a recycling bin for my water bottle (seriously why are there no recycling bins along Gorey harbour??) and waited for Becky.

Our conservative pace to this point was now paying dividends as we caught and overtook a number of people along the coastal road. We also tried to encourage those faltering to keep going and at one point there were six of us in a little half marathon fun bus trucking along.

But by the time we’d passed Le Hocq, they had dropped off again and it was just us two for the final slog back to the track.

I don’t know what it is about track finishes but there is definitely something cool about them. Maybe it’s the fact you can see the finish line and know you will finally make it but with essentially a lap of honour, like that final turn down the Mall at the London marathon.

Becky was stoked to finish and even happier with her medal. I finished in just under 2 hours and 10 minutes on tired legs and a sore GI system. I’ll take that.

Home and asleep for the next six hours. The rock and roll life of a wannabe athlete.

2 thoughts on “Jersey Spartans Half Marathon 2018”