There is, however, a secret eighth: Lead Bike

The reason it’s so secret is that it take a lot of effort and is not for everyone but if successful, you unlock an elite volunteer sub-event – the parkrun Brick. Not very attractive as names go but I couldn’t think of anything better.

By doing your lead bike duty and then jumping off and haring after the tail walker, you not only get a damn good workout (which is perfect for triathlon), you also get one step closer to run and volunteer club t-shirts. Hurrah.

How do I join the club?

The first rule of Brick club is…check whether your local parkrun is suitable for Brick club.

The parkrun Brick consists of a 5k cycle in front of the leading runner followed by a 5k run.

Giving my local Jersey parkrun as an example, the lead runner finished in 16:24 minutes this week (which is quicker than average). The tail runner finished in 45:15. That gave me just under 30 minutes to finish ahead of him with an additional 1/5 miles to get back to the start line. Add on a more significant “transition” and things get tricky.

If you don’t think you can catch up with the tail runner, then this is not for you at the moment but something to work towards. The last thing that you want to do is slow up the process for the timekeepers, token and finish line support volunteers, let alone the marshals who are positioned around the course.

In fact, you should only even attempt the Brick if you have intimate knowledge of the course which mean no corner cutting, even if nobody is watching. Most times I’ve attempted the Brick, at least one of the marshals has picked up the turning point board and walked off.

It’s a good idea to let your Run Director know you’re going to attempt the near impossible. They’ll probably look at you in a confused manner or laugh. This reaction is common. 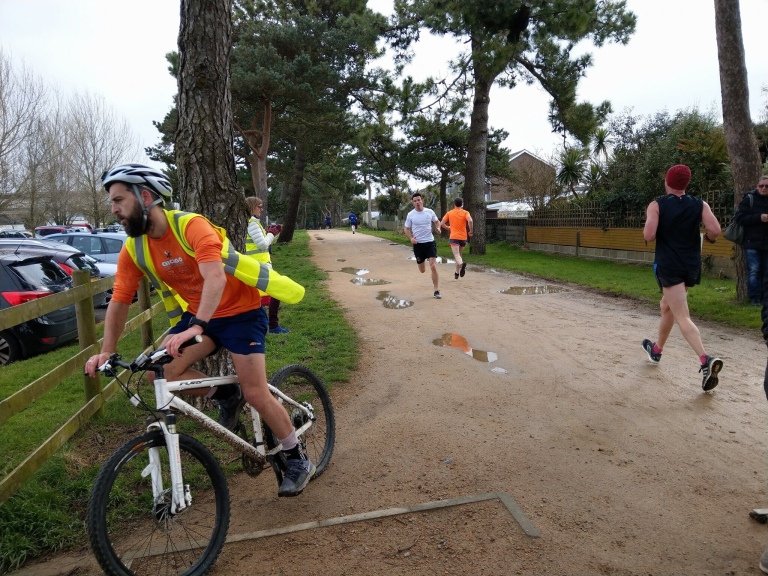 Once, you’ve got round the bike, put your hi-vis jacket, helmet and volunteer instructions, together with your bike, in a safe and tidy place. Do NOT just leave your bike in the middle of the funnel and run off. People will not like you.

And then, head off into the lonely, painful world of hunting down the tail runner. There are no real rules, just run as fast you can

Once finished, you will get a bar code, more looks of confusion and probably a little bit of sick in your mouth.

Hours later, when you’ve finally recovered, you will get two shiny emails thanking you for volunteering and congratulating you on completing!