I don’t know if I’ve mentioned it recently but there is a race in Dorset with which I have a strange relationship.

Coast Trail Series Dorset or CTSD as nobody calls it, consists of 10k, half-mara, marathon, Ultra (33 miles) and Ultra+ (45 miles). Over the past two years I have entered the Ultra and Ultra+, falling a long way short on both occasions.

But there was always something calling me back. Maybe it was the 5.00am alarm clock? Perhaps it was the 30% gradient hills almost immediately after starting? No, it was this:

It might sound strange but I felt some kind of peace going into the race. Considering I hadn’t finished a race CTS race yet, it might have been complacent but I just knew I was going to finish. I would’ve crawled the entire way if needed. I just knew that this time, I would finish.

There can’t be many races that start with such a massive uphill straightaway? If you are under any misconceptions about how hard your day is going to be, this beast soon dispels them. Followed by an equally brutal downhill, then uphill, then down again, then up and then…some kind of runnable stretch of gentle rolling countryside with the English Channel on your left and England’s green and pleasant land on your right.

A swift hello to the man with a cow bell (who was to turn up at least three more times on the course), a high-five to two cheering kids and I was into the woods, over a stile and into the first check-point.

At this point I realise this race report sounds incredibly dull because it seems like it wasn’t hard work. That’s not the case at all, my legs were already aching, the early morning cold was creeping into my chest and I was not enjoying my food choices at all but I was loving it. It was the 45 mile equivalent of stopping to smell the roses.

Another reason that the miles flew by was constant company. If you’re not going to be pushing for the podium, buddy up with someone for a couple of miles and watch the time float past. In no particular order I shared stories and mileage with Paul and Nicola from Jersey, the guy from Taunton whose mate dropped out, the guy with the poles who was training for The Brutal triathlon, the couple from Essex who were training for Comrades and the TP100, Rebecca from London, the guy I chatted to about Hokas, all of you and the countless others helped the miles melt past.

And when I was on my own, I was listening to podcasts, chuckling away the lactic acid that was slowly consuming my calves and quads.

The Eastern loop of the CTS Dorset course is so strange and beautiful but so unforgiving that I was actually looking forward to the seeing the first set of hills again. Climbing is all well and good if there is a bit of running involved but this was just incessant, steep incline after descent and repeat. Taking pictures, eating and skipping tracks on my iPod (yes I still have one) were good excuses for taking a breather and letting other people go through. Problem is, they kept doing the same thing to me.

Back along the beach and I could hear my mum shouting from the other side of the cove! She and Chris had tea, flapjacks and Clif blocks! Despite her reservations, they do make a good crew, they just need to up their game for SDW!

Climbing out of Lulworth for the second time, this was the furthest I had ever got in my CTS races but I was really struggling for energy. The answer was to eat an entire packet of Clif blocks which contained enough sugar to give a small country diabetes but they got me up the hills in time to watch the sun set over Weymouth.

It had never occurred to me that I would finish the race in the dark but as I got to CP1 for the second time, I realised I was just terrible with maths. Of course I was never going to finish during daylight! The kind woman at the checkpoint reached into my sweaty racing vest for my headtorch (sorry) but the moon was actually bright enough to run most of the way without it, only turning it on and spooking myself out in the field of sheep or the narrow bits, just after the caravan park (nobody mentions the caravan park in their reports) on the way back to the start/finish line.

The final climbs were slooooow, wobbly, stumbles but my final 5k was a glorious mix of AC/DC, Queen and finally Kenny Loggins bringing me home, running through a black night on the Dorset cliff paths, to hear a car horn honking away below me. , Deb and Chris waiting patiently.

I was so slow that the finish line had been taken down and the car park was nearly empty but I had done it. I’d conquered my demons and I was back in positive territory for ultramarathon completions (4 finishes, 3 DNFs).

Thank you to everyone who had to hear me bleat on about completing it (including those after the race) or had to put up with my moods when I didn’t, to the volunteers from Endurancelife, to my mum and Chris and finally, to the Jurassic coast of Dorset, for just being so awesome that I am already thinking about going back.

Maybe just as crew this time though!! 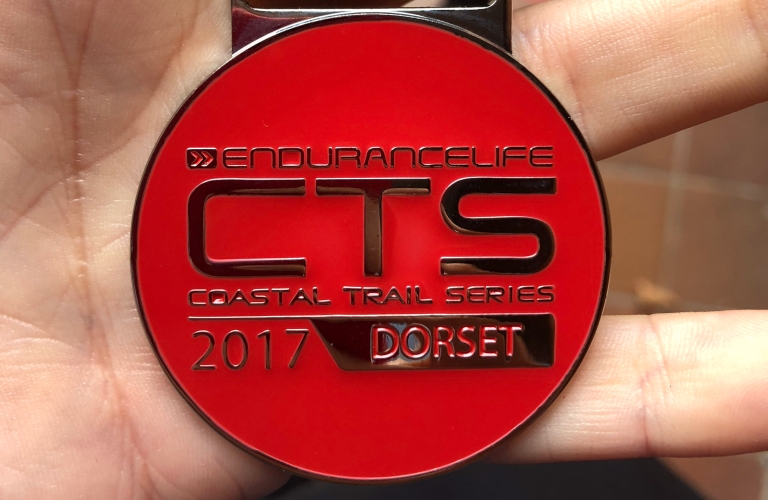 One thought on “CTS Dorset 2017: Ultra plus redemption”