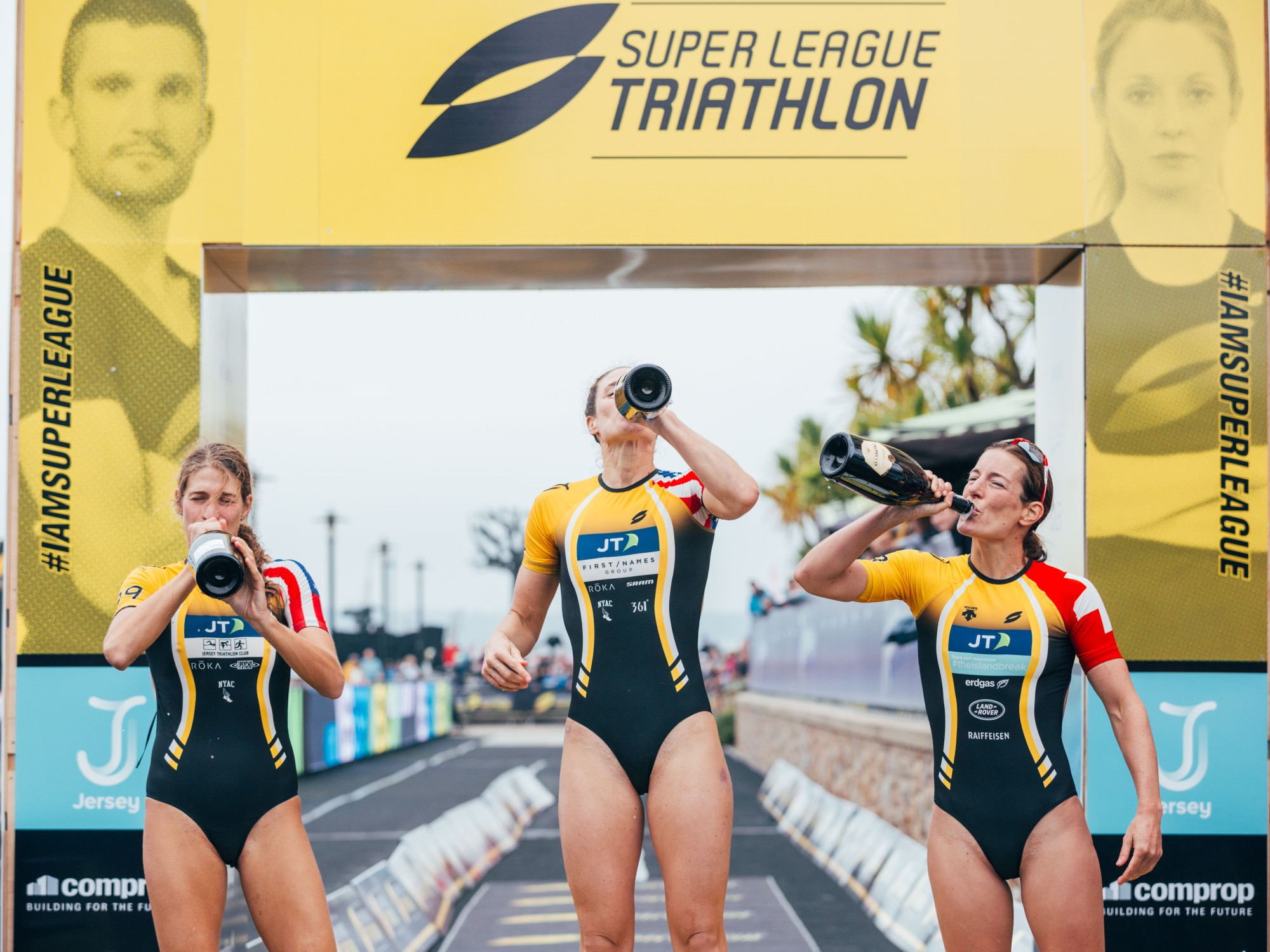 Super League Triathlon crowned its first queen with Katie Zaferes taking out Sunday’s Eliminator race and the overall win at Super League Jersey. The Eliminator podium also mirrored the final overall podium, with Summer Cook besting Nicola Spirig to the runner-up spot in the race itself as well as in total points earned. 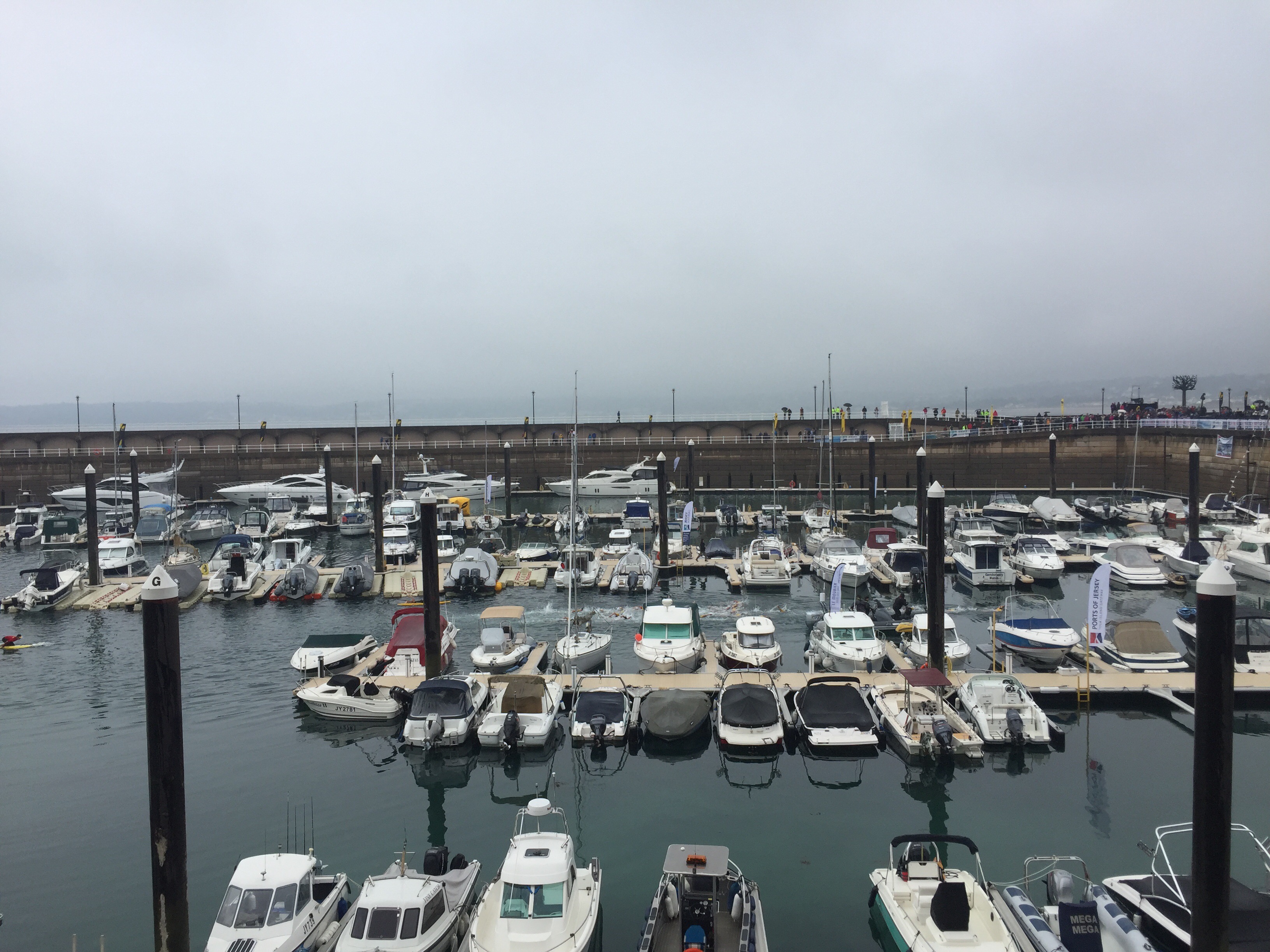 Wet conditions today stood in stark contrast to yesterday’s sunshine. As the technical bike course shimmered with leftovers puddles from a midday storm, athletes needed to play a tactical game to ensure they stayed rubber-side up.

Stage 1
Great Britain’s Sophie Coldwell led through the 300-metre swim with Kirsten Kasper of the USA and Carolina Routier from Spain in second and third, but a traffic jam at the bike mount allowed Coldwell to break clear. Compatriot Jodie Stimpson found her way up onto Coldwell’s wheel, with the two athletes working together to control their race over the five kilometre bike course where slick cobblestones and tight corners posed many dangers to success.

A wise decision it seemed, for further back in the pack small mistakes on slick patches of road cost athletes some skin and more as they crashed into each other. Two pairs of athletes crashed in the same location one lap apart, taking them out of contention for Stage 2: Desirae Ridenour of Canada and Emma Pallant of Great Britain, and Barbara Riveros of Chile and Emma Jeffcoat of Australia.

Meanwhile, the leading Brits proved well capable of handling the wet, riding into transition with a clear lead for the run. Yesterday’s leading athletes Zaferes and Spirig seemed content to let Coldwell and Stimpson surge ahead; after all, one only needed to rank 15th and higher to move on to the next round.

Coldwell and Stimpson high-fived each other and crossed the finish line together after the two-kilometre run, while Spirig was unable to resist her competitive nature and surged to third place.

A race-within-a-race unfolded for 15th place, with Claire Michel of Belgium clinching the final spot into Stage 2 ahead of Russia’s Anastasia Abrosimova.

Stage 2
The big names were still among the 15 to toe the Stage 2 start line. Coldwell and Stimpson emerged from the water in front, with a few athletes in the back caught in some accidental fisticuffs on the swim.

Zaferes, Spirig, and Kasper stuck close to the two Brits to hit the run in the lead group. Coldwell faded, allowing Spirig, Zaferes, and Kasper to finish second, third, and fourth to Stimpson.

It became a heated race for the last five spots on the Stage 3 pontoon. After a while on her own, Cook finally bridged up to the leaders. Rachel Klamer, Charlotte McShane, Emmie Charayron, and Melanie Santos beat Non Stanford for the chance to race once more.

Stage 3
While the athletes had been largely tactical through the first two stages keeping their chips close, Stage 3 of the Eliminator was where they would spend them. It was time to see who could go fastest over the now-familiar course.

The pace was up as athletes stretched out single-file over the swim. Coldwell once again was first out of the water, followed by two Americans Kasper and Cook. The three pushed to make a break on the bike, but a hard-charging Spirig pulled Stimpson and Zaferes right back up onto them.

It seemed a battle between Spirig of Switzerland and Zaferes of the USA as they got onto the run, but it was here where the American’s fleet feet took her to the front, never to look back.

Meanwhile, Cook’s track-and-field background came good as she put on a surge of her own to pip Spirig for second. While Kasper attempted to make it an all-American podium sweep, Spirig held strong to clinch third.

“On the run I knew when I made the pass I had to gap them or else it was game over. So I really just went for it and I tried not to look back. I was running pretty scared at the end but it worked out,” said Cook post-race. “I was really nervous yesterday morning and I wasn’t sure what to expect. I was a little bit scared but I ended up thinking last night that yesterday’s format was one of the most fun races I’ve ever done. Today was pretty fun too but I’m still in a little bit too much pain to appreciate it yet.”

While Spirig slipped to third overall after coming in second yesterday, finishing at the pointy end in a top-caliber field was a testament to her strength and quality as an athlete. She said, “It’s good fun, I think it was tough for everyone today with the weather and with the format but well done to the girls and I think I did my best. I’m very happy.”

Zaferes takes home the top prize of $18,000 and the first women’s trophy for Super League Triathlon after a consistent season on the world triathlon circuit. “It’s just so cool, it’s a different style of racing. It’s a fun style but it is so painful and you cannot hide anywhere,” she said. “I would love to do more of these.”