The weather was fine. Slightly chilly but not windy nor wet. As I hiked up the first brutal climb of the CTS Dorset Ultra 2016, I have to admit I was a little bit disappointed.

2015’s gale forces meant that I had trouble standing upright at times, let alone running. This year’s recounted tales of the previous like it was a mythical occurrence, an ethereal adversary that you would not believe unless you were there.

So as I crested that first hill and began to trot along the South West Coast path, I felt like the time and conditions were right for me to conquer my one and only DNF to date.

And it was about this time when a familiar ache crept into the top of my left shin, enveloping the outside of my knee in a dull pain. For the past three weeks, I’d had the same feeling after any run longer than a couple of miles.

Some basic googling suggested it was something to do with my ITB so I did a couple of stretches, rolled on the foam roller and a hot bath which seemed to have fixed it.

Until the next run. But rather than rest up and try to make it to the CTS unscathed, I actually upped my mileage in some misguided hope that I was invincible and my knee would just fix itself.

Funnily enough, it didn’t and I wasn’t.

There are four ridiculous hills at the beginning of the CTS course and I walked/clambered/powerhiked up all of them with no real ill effects. Until it was time to go down the other side.

Running downhill like a freewheeling loon is probably my favourite part of trail running so to slowly sidestep down with shooting pain in my knee every couple of steps was not a good sign.

Once through the initial section though, a lot of the first loop is definitely runnable. So I tried to focus on the blisters in my right foot that were already beginning to hurt and the bleeding skin on top of my left second toe. Arguably, running four miles with no socks the previous day was not my wisest decision – it is the first time I’ve started a race with blisters and foot problems.

My mind games seemed to work for a bit but the knee pain was always there, slowing me down when I had the chance to speed up and generally being annoying.

So much so that I was constantly looking down at the ground, worrying that a wrong step would be the end of my race. But by looking down and worrying about every little roots or stone, I was missing the whole reason I’d loved this race last year.

The battered long grass being thrown around by the increasing wind, the brooding blue sea swelling below me and the connection with the outdoors was the whole point of running races like this so to see less than five feet in front of me was a waste.

By this point I’d made it to the first checkpoint – 6.3 miles in 1.27 hours – which wasn’t actually too bad. But my knee was getting worse with each step and now I couldn’t block it out.

For a while I chatted to a nice couple from Calgary which seemed to help but as soon as I tried to run along the flatter part at the top of the climb, something in my knee clicked. And not in a good way.

There was a brief flash of pain before I quickly removed all weight from it and began to hobble slowly. There were a few people around me who asked if I was alright and like the proud, manly man that I am, I said yes but inside I knew that was it for the day, if not longer.

I wasn’t angry, I had made the right decision but I just wanted to pull the luminous beanie over my eyes and curl up in a ball on the grass. There were people all around me but I felt like I was some lost and weary traveller on an exposed moor, trying to make his way home but never getting closer.

Earlier I had removed a couple of layers, my hat, buff and gloves as I was getting hot but now, I was beginning to get cold very quickly. The sweat was chilling as the wind headed out sea through me and I stopped to put on the rest of my clothes before beginning to walk the four miles back to the car. 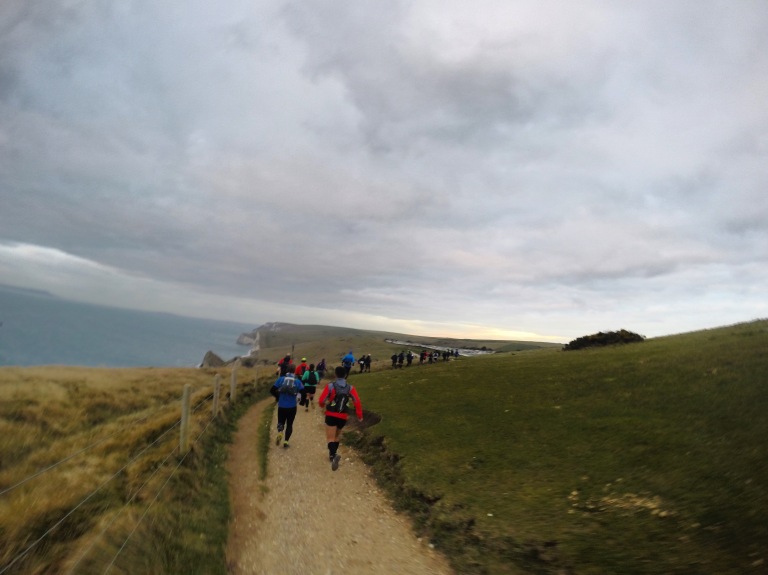 I began walking but having stopped, my knee no longer wanted to bend at all so I was walking with an exaggerated limp like pantomime pirates do. I was also past the point where the other distances join so was constantly being overtaken as I hobbled on.

A murder of crows even hovered around me at one point as came within sight of Lulworth Cove. I know I was having a hard time but I didn’t think my demise was going to be that drastic.

The descent into Lulworth Cove could not have been worse. It felt like people were tearing past me, all full of enthusiasm and energy as I stepped carefully down. The official photographer even had the temerity to take a picture of me at my most weary – not one for the official calendar.

The staff from Endurancelife were all lovely, checking I was alright and asking if they could get me anything. They could clearly see that I was struggling and in some ways I was actually thankful that I was limping as it showed that there was actually something wrong, I hadn’t just given up.

So I just slunk back to the car, downed two packets of hula hoops and drove away, once again defeated by the course.

Either that or I’ll go for the Ultra Plus and actually prepare properly this time.