Nearly 3 months to go until I leave Richmond at 6am attempting to end up in Brighton around 10-14 hours later.

While that sounds like a long time, it actually means 6 weeks until my longest run and 8 weeks until I start the tapering process.

At which point (in theory), my body will be ready to run 62 miles and 4,204ft of elevation non-stop.

Now I am scared.

As you can see from my new favourite website SmashRun, February was pretty much a write-off in terms of training.

A combination of a week snowboarding and my own complacency meant that the miles dropped off and any foundation built during #writeandrun31 in January was fading into the past.

So this week I have hit it hard. I have got back on the running wagon. Remounted the horse. Insert further idiom here.

It began with a successful bash at a PB on Saturday morning at Mile End parkrun.

Part of the reason for the success is definitely the fact I woke up so late that I basically ran to the start line as the kindly volunteer shouted “GO” and I kept on going.

I’m not sure it would work for Mo Farah but there is definitely something to be said for carrying your speed into the beginning of a race like a rolling start in NASCAR.

Sunday was a day for planning and runmin (running admin?). Imagine my elation when after finally putting my plans on paper, I realised that my chosen training plan from Relentless Forward Progress “only” required 8k that day.

So I ate and ate and watched sport and then ate some more, smug in the knowledge that I had small run to complete.

Which was when the heavens opened and the wind whipped up outside. My smug, well-fed face dropped as I realised I would have to run in it minus the gloves and headphones that I had left on the train after the otherwise excellent Brighton Half.

It was cold, it was wet and it was a lesson in getting the job done early rather than resting on your laurels.

If Sunday was a lesson, Tuesday was exam time.

I’d forgotten that when training for longer events, your training during the week is naturally longer plus you actually have to go to work and do normal, real life things too.

A full day in the office, football at lunchtime and a cycle commute did not lend itself well to a positive approach to 14k in the evening, especially once I had got home into the warmth of my house.

But by digging around in the shoeboxes of relics I really should dispose of, I found an ipod and some old headphones.

My soon to be chilly and silent run was now at least not silent so I also took the step of leaving the comfort of my tried and trusted river route for pootle around the hipster hubs of Shoreditch and Dalston before wandering back via Angel, Smithfields and The City.

This may have been a mistake.

As I headed north towards Dalston Junction, I passed so many people enjoying a drink that I felt both jealous and ridiculous. 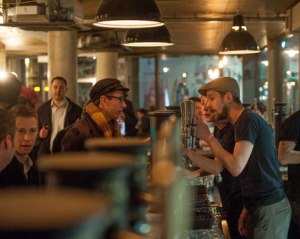 Why was I dodging revellers instead of being one? Surely my brain had miscalculated there?

It got worse as I continued through Kingsland Road and I realised that I was now hungry and hadn’t brought any money. Brightly coloured Vietnamese restaurants beckoned me with their smells.

Like Odysseus trying to avoid the Sirens song, I sped up and ran through the tempting trail.

The problem was to be repeated as I ran through Angel.

Even hungrier, still without money and quickly losing faith, I hastened my route past Ottolenghi’s, the Gate and countless welcoming eateries of every cuisine you could imagine. It was like Willy Wonka’s Chocolate Factory for those with no sweet tooth.

My mind and stomach craved sustenance and this pushed me on and on. In fact so much so that I arrived home early with another kilometre to go so ran a frustrated and labyrinthine route around my neighbourhood to make up the extra 1000m.

Once home, I devoured half a loaf of melted cheese on toast before collapsing in a carb-and-bubbly-dairy-induced stupor.

It may not have been haute cuisine but my cravings were satisfied and I’d probably consumed the calories I’d just burnt off.

Next time, I’d either eat first or avoid running past anywhere that looks fun/warm/tasty.